Elastic Tuning and Response of 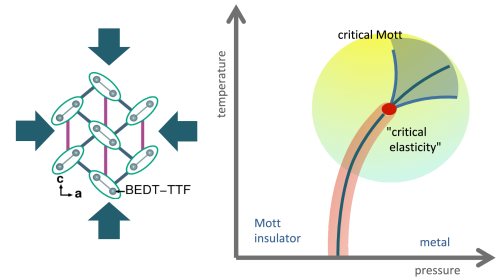 In this area, the focus lies on materials design and synthesis, thermodynamic characterization and analysis of transport properties, in many cases under applied stress. Of crucial importance will be to gain control over the various phases by using suitable tuning parameters that couple to the materials' elastic strain. Depending on the material and the purpose, this can be chemically induced pressure (mainly via isoelectronic substitutions), hydrostatic pressure, uniaxial- or biaxial strain, or a combination thereof. In this way, we will be able to disentangle effects of competing interactions and to study their role for the material's property of interest.

A01 (Wolf/Lang) will study the close interlocking of electronic and lattice degrees of freedom upon pressure-tuning systems into the vicinity of phase transitions. Special attention will be devoted to the expected occurrence of critical elasticity around the valence transition in EuPd2Si2 and related variants. A second focus will be the possibility to induce novel phases, such as valence-fluctuation-induced superconductivity, near the transition associated with the collapse of the tetragonal unit cell in Eu(Fe1-xNix)2P2.

A02 (Böhmer/Meingast) will use extreme anisotropic mechanical stress applied through specially tailored fiberglass substrates and other substrates with large thermomechanical mismatch, in order to control and investigate highly strain-sensitive itinerant antiferromagnetism in Fe- and Co-based AT2X2 compounds, as well as the proposed orbital-selective Mott transitions in strained CsFe2As2.

A03 (Kliemt/Krellner) will grow and characterize high-quality single crystals of ternary intermetallic compounds of the AT2X2 structure. The project supplies samples to groups at all nodes of the CRC/TRR and in both project areas. It will also perform explorative growth of new compounds in the AT2X2 family, an effort guided by the theory project A05 (Valentí).

A04 (Huth) will fabricate epitaxial thin films of EuPd2Si2 by molecular beam epitaxy and investigate elastic anomalies on strained films via magneto-transport and surface acoustic waves, serving as a crucial complement to other studies on EuT2X2 and Fe- and Co-based AT2X2 compounds that focus on bulk materials.

Interplay of lattice, charge and spin degrees of freedom from first principles

A05 (Valentí) will model strain and pressure effects in selected materials via a combination of ab initio density functional theory, molecular dynamics and recently developed projective techniques. A particular focus will be to obtain a microscopic understanding of the interplay of lattice, charge, and spin degrees of freedom in these materials and a microscopic description near phase transitions. Limits of possible superelasticity in AT2X2 and derivatives will be investigated in collaboration with the proposed Mercator Fellow Paul C. Canfield. Material-design simulations using genetic algorithms in collaboration with A03 (Kliemt/Krellner) will be also performed. This project will support various theory and experimental projects with electronic structure and phonon spectrum calculations.

A06 (Lang) will investigate the intimate coupling between the electronic and elastic degrees of freedom in frustrated organic charge-transfer salts via thermal expansion and dielectric measurements controlled by temperature and He-gas pressure. Special attention will be dedicated to the phenomenon of critical elasticity around the Mott transition, and the possibility to realize and control new phases such as electronic multiferroicity and charge-glass states. There will be strong interactions with various experimental and theory projects working on these systems. The project will also supply single crystals to the collaborating projects.

A07 (Kopietz/Schmalian) will develop and exploit theoretical methods, such as functional renormalization group and strong-coupling expansions, as well as sign-problem-free Quantum Monte Carlo techniques in collaboration with the proposed Mercator Fellow Rafael M. Fernandes, to bring the theory of electron-lattice coupling in correlated electron systems to a more advanced stage and apply it to materials such as AT2X2 and κ-phase organic charge-transfer salts.

A08 (Sürgers/Wernsdorfer) will exploit the unique sensitivity of nitrogen-vacancy centers in diamond to magnetic fields, strains, and temperature to optically detect local strain fields. This new development of the method will be applied to antiferromagnetic thin films with a non-collinear magnetic structure and strong magnetoelastic coupling. In the long term, the technique will be available to other projects of the CRC/TRR.

A09 (Sinova/Gomonay) will develop novel theoretical approaches of magneto-elastoresistivity, and compute the strain-modified anomalous Hall effect for complex magnetic systems studied in the initiative. Central aspects of the theory will be the inclusion of spin-orbit coupling, disorder and electron-electron interactions near phase changes. While this theory project will interact closely with the experimental project A08 (Sürgers/Wernsdorfer) and the theory projects A05 (Valentí) and B05 (Valentí/Sinova), a superior understanding of the magneto-elastoresistivity and the effects of spin-orbit will be a crucial benefit for many other systems studied in the CRC/TRR.

A10 (Hicks/Mackenzie) will directly determine the stress-strain relation in systems near volume collapse or nematic phase transitions, where the assumption of a linear relation between these two quantities is insufficient. To this end, dilatometry under uniaxial stress, using piezoelectric actuators to apply the stress, will be developed and applied to materials such as BaNi2As2 and CrAs which are of interest to many other projects of the CRC/TRR. This project provides an important complement to A01 (Wolf/Lang), which covers dilatometry under hydrostatic pressure.

A11 (Garst) will theoretically investigate quantum materials with a non-perturbative elastic coupling to electronic degrees of freedom, especially, close to quantum critical points. Particular focus will be also given to the properties of crystal defects close to isostructural transitions that are triggered by electronic correlations, as well as to novel magnetoelastic surface states in non-collinear magnets.

In this area, we focus on spectroscopic studies of strain-tuned materials and on the dynamic interplay between the elastic deformations of the lattice and the coupled electronic orders. Our aim is to determine pathways for dynamically controlling the electronic properties by using selective elastic stimuli.

B01 (Schmalian) will develop the theory that describes the impact of defects and impurities on the quantum dynamics of strain-coupled electronic order in close collaboration with the measurements in B02 (Müller). The goal will be to describe electronic inhomogeneities and noise in nematic systems and develop a theory for quantum nucleation and noise at volume-collapse transitions in systems such as EuT2X2 materials and κ-phase organic charge-transfer salts.

B02 (Müller) will investigate the slow dynamics of correlated charge carriers arising from their coupling to the elastic properties in AT2X2 materials and organic charge-transfer salts. To this end, fluctuation spectroscopy measuring the low-frequency (mHz–kHz) resistance or conductance noise, will be performed, revealing important information about the impact of defects and critical modes on the out-of-equilibrium aging of ordered states.

B03 (Le Tacon/Haghighirad/Hicks) will investigate the interplay between charge order, superconductivity and magnetism in a range of correlated superconductors of relevance in the CRC/TRR by using a combination of crystal growth, thermodynamic characterization, and a unique device recently implemented by the PIs for (inelastic) X-ray scattering measurements under large strain.

B04 (Elmers) will gain in-depth understanding of the electronic response to elastic strain in correlated systems using time-of-flight momentum microscopy of strained samples, in a system newly implemented by the PI and collaborators. This multi-dimensional photoemission data-recording technique will be used to investigate EuT2X2 intermetallic compounds and the mono-pnictides CrAs, Cr1–xMnx(As,P) that are central to numerous other projects.

B05 (Valentí/Sinova)} will combine complementary state-of-the-art numerical approaches — dynamical mean field theory with either relativistic density functional theory or first-principles-derived Holstein-Hubbard- and Kane-Mele-Hubbard effective models — to investigate the interplay of relativistic effects, correlations and coupling to the lattice. Spectroscopic investigations for correlated materials in close collaboration with B03 (Le Tacon/Haghighirad/Hicks) and B04 (Elmers) will be pursued.

B06 (Mokrousov/Wulfhekel) will use high-resolution scanning tunneling microscopy down to 30 mK in combination with density functional theory to study the dynamics of magnetic two-dimensional transition metal dichalcogenide layers, i.e. systems that exhibit high-temperature magnetism and display numerous analogies to the AT2X2 systems, with the goal to analyze the impact of strain on electronic properties, charge-density-wave formation, and magnetic order.

B07 (Kim/Bonn) will study phonon-induced non-equilibrium phase transitions in two model systems exhibiting strong electron-phonon coupling. Using non-linear THz/vibrational spectroscopy, the project will explore metastable, switchable transient atomic arrangements as well as phases that are only present for the duration of the light pulse and/or the time scale over which coherent phonon motion is preserved. These investigations will be performed for κ-phase organic charge-transfer salts and hybrid organic-inorganic perovskites. The latter material class is specially chosen as a testbed case for such phenomena.

B08 (Demsar/Roskos) will exploit light-driven excitations of specific phonons, and collective dynamics in strain- and pressure-tuned systems to manipulate collective states by ultrafast structural distortions. These investigations will be performed for the AT2X2 materials and κ-phase organic charge-transfer salts.

B09 (Marino/Pientka) will develop a theoretical framework for the study of far-from-equilibrium phenomena in strongly correlated, electron-phonon systems to understand the coupled dynamics of electronic excitations and lattice vibrations as well as their experimental characterization within the CRC/TRR. A particular focus will be on the interplay of electronic correlations, strong electron-phonon coupling, and an external drive, in shaping novel states of matter without equilibrium counterpart.